* Tour Departure : 2pm (ealier or later up on request)

* New York Times magazine polls Da Nang one of the ideal destinations in the world in 2015 because this place possesses the stretch of gorgeous sandy beaches.

Besides, this city also clings to tourist’s feet by the modern and civilized image, and always offers something new. Follow us,we show you the greatest insight about this “worth-living” beautiful city.

– Our Private Tour Guide will meet & greet you at your hotel lobby in Hoi An or Da Nang city,in our modern air-conditioned vehicle with senior driver taking you to the first misterious site- Marble Moutain,it is a group of five marble and limestone mountains, named after the five elements of the ancient oriental philosophy: metal, wood, water, fire and earth.

These mountains have a complicated system of caves and tunnels. In the past they were used as hiding places and important bases for the Vietnam revolutionaries. Marble moutain itself is also known as a sacred Buddists pilgrimage.

– A new journey starts with a beautiful coastline ride toward Son Tra peninsula– A meeting place of heaven and earth’s sacred air and people’s heart. Just 9 km away from the city center, Linh Ung Pagoda is now considered as the largest pagoda in Da Nang City in both scale and art of architecture.

The pagoda brings a contemporary style combined with inherent tradition of pagodas in Vietnam, with curved roof in dragon shape, the solid pillars surrounded by sophisticated sinuous dragons. By walking to the statue, you may get stunned by the 67m high spectacular statue.

– Next stop : Han market– “the humming heart of the busy city”. There are two reasons why you should visit Han Market in Da Nang: to find some great bargains on souvenirs, clothes and fresh produce, or to observe the local life.

Han Market opened during the French occupancy of Da Nang in the early 1940s and was named after the river Han that it ran parallel to; it was regarded by locals as the ‘rich market’, as most of its wares were either shipped or bought in by a French-constructed train system called the Tourane Marche, making it the place for wealthy classes to source more expensive imported goods. In 1989 the market was subjected to a massive renovation that added an extra storey, making it the biggest market in Da Nang and also apparently the cheapest.

– Dinner time !! We will have unique tastes of local foods or “your choice” restaurants

– Interesting part after dinner is Han river Cruise,you will admire the beauty of this city under vivid lights performance from houses,towers and bridges as well as stunning reflections from the river. Loads of photo opotunities taken from many differen angles whislt enjoying fresh breezes.

– We return safely back to your hotel in Hoi An or Da Nang city late evening.

* Throughout the journey, we will have the opportunity to see the beauty of the bridges that make up the characteristics of Danang city: Dragon Bridge, Thuan Phuoc Bridge, Tran Thi Ly Bridge, Love Bridge. You can stop the car, freshen up and take photos wherever you want to save the beautiful moments, that’s really an advantage!

* NOTE : If you book this tour on the weekend (Sat or Sun) weekends and annual festivities, the Dragon “state-of-the-art” bridge is also scheduled to spit water or breathe fire from its mouth from 21:00 onwards 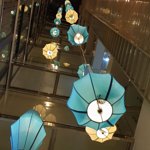 Walking Food Tour & Marble Mountain, Lady Buddha and The fire breathing Dragon at night.
We did 2 tours with Ha whilst in Hoian and both were awesome fun. Firstly the walking food tour was yummy! Ha picked us up from our hotel and we walked to each food stop, 16 dishes and each one was amazing, we learnt the stories/history behind each dish. Every dish was a different taste sensation! We had the best night. The second tour was also fantastic it was an afternoon to Marble Mountain, Monkey Mountain and Lady Buddha, then dinner in Denang and then onto a cruise to watch the Dragon Bridge breath fire & water, whilst sipping on a couple of cocktails. For dinner Ha took us to a local Denang seafood restaurant to experience where the locals hang out and eat, this place was awesome, only the locals know about it and the food was some of the best we had in Vietnam. Ha also arranged our airport transfer from Danang to Hoian, the driver spoke good English and was very friendly.I highly recommend Ha for any tour you may want, he is very easy to talk to, fun and very knowledgeable, he is very flexible and will tailor tours to suite. Thanks Ha more

Friendly, knowledgable and great English
Everything about the tour was excellent. Everything was so convenient, the price was very competitive and I felt the amount of things I got to see was brilliant. I would highly recommend the tour to anyone of all ages. Can’t recommend it enough he was so flexible as well you’ll be hard pressed to find better!